The Fargo Invaders took on the Twin Cities Sabercats on Saturday, July 9th, in North St. Paul. The Invaders came away with a great victory over the number 2 ranked team entering the matchup. The final score ended up being 68-15, with this being the first game that an opposing offense has scored a touchdown against the Invaders.

The Invader offense was clicking on all cylinders throughout this one. Justan Taliaferro had a great passer rating of 153.8, to go along with his 114 passing yards and 4 touchdowns. The backfield for the Invaders was overall a dominating effort by a group of players; CT Davis, Brandon Jones, Derek Alexander, and Brett Baune. In total the Invader backfield racked up 253 yards rushing and recording a total of 4 touchdowns. Micah Arnold led the receivers in touchdowns ending the game with 2 and 32 yards receiving. Jon Baune had a great game as well hauling in 4 catches for 61 yards and a touchdown.

The Invader defense all around was very impressive with the only scoring outbreak coming in the second quarter. The Invaders gave up their first touchdown early in the second, which was then followed by another touchdown later on in the quarter. Jeremy Gordon led the defense with a total of 6 tackles & 2 Forced Fumbles. Brandon Sloan had an outstanding game, hauling in 2 interceptions before it was all over.

The Fargo Invaders clinch the #1 seed with this win, giving them the rights to home field advantage throughout the playoffs including the Championship Game on August 13th.  Next week the Invaders travel to New London-Spicer to take on the West Central Broncos.  With the success of this season so far, the Fargo Invaders have been ranked #22 in the nation by Semi Pro Elite!

To check the full play-by-play stats as well as the live game sheet go to http://www.northernstatesfootball.org/game/game_sheet/12825492 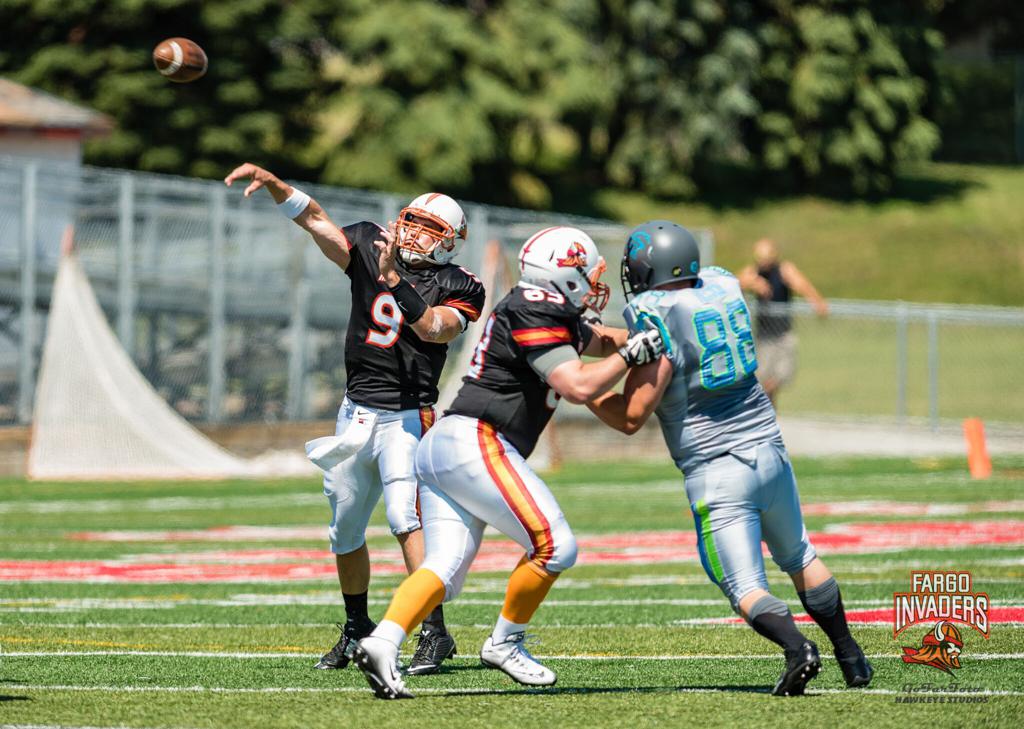