A chance to create more memories

FARGO—Jon and Brett Baune never took their time together on the football field for granted.

Brett, the record-setting fullback for the Concordia Cobbers, was a senior and a force throughout the MIAC when the Baunes got their first chance to play together. Jon, a freshman wide receiver at the time, was better known as Brett's younger brother, but a brother with a lot of promise.

While they only they shared the field for a year, the duo took advantage of the opportunity, knowing it was probably the first and last time they were on the same team.

Fast forward four years. Jon, a recent exercise science graduate, has made a name for himself in his first season playing for the semi-pro Fargo Invaders—proving himself as a "dude," according to head coach Brent Lundgren.

So when an injury left a running back position open, the Invaders coaches asked Jon if Brett would have any interest.

"It just kind of happened. They needed a back and Jon put in a good word for me," Brett said. "I never really considered playing because I wasn't living in Fargo, but watching Jon out there gave me that itch to play again."

That "itch" was enough for Brett to join the team on game days, traveling from Minneapolis where he works at a rehabilitation institute while applying for physician assistant school.

"I compare this season to Jon's freshman year, just flipped around," Brett said. "Jon was the new guy back then when I was already established on the team, so he had to learn and make a name for himself. And that's what I am doing now."

Jon emailed his brother the playbook before the Invaders 64-0 blowout win over the Northland Blitz last week in Duluth, Minn.

No. 40 fullback Brett Baune runs the ball in for a touchdown during the first quarter against Granite City on Saturday, June 25

"He brought it all printed out in a nice folder. He knew what he was doing right away," Jon said. "It's exciting, I mean we hadn't played together since he graduated. I never expected to get a chance to play together again."

It took only until kickoff for one of the siblings to make a play in Brett's first meaningful game in three years.

"We put Brett on the kickoff, and the first play he makes the tackle," Lundgren said. "The Baune brothers are different animals."

Lundgren loves what the Baunes bring to the already impressive Invaders roster.

"To have them playing together on our team is an exclamation point for what we are doing," Lundgren said. "We want to create an environment where guys have a chance to succeed."

For father Gary, the Invaders is a new experience and a chance to create more memories watching his sons on the same field.

"It's a very positive and family-friendly program," Gary said. "We figured Brett was done, but it's neat because you get the chance to play with players from all over the place. Everyone there just wants to play football."

The Invaders' success continued with a 51-0 thrashing over Granite City on Saturday, June 25, at Sid Cichy Stadium.

The Invaders will go on the road in two weeks to play the Twin City Sabercats in St. Paul. 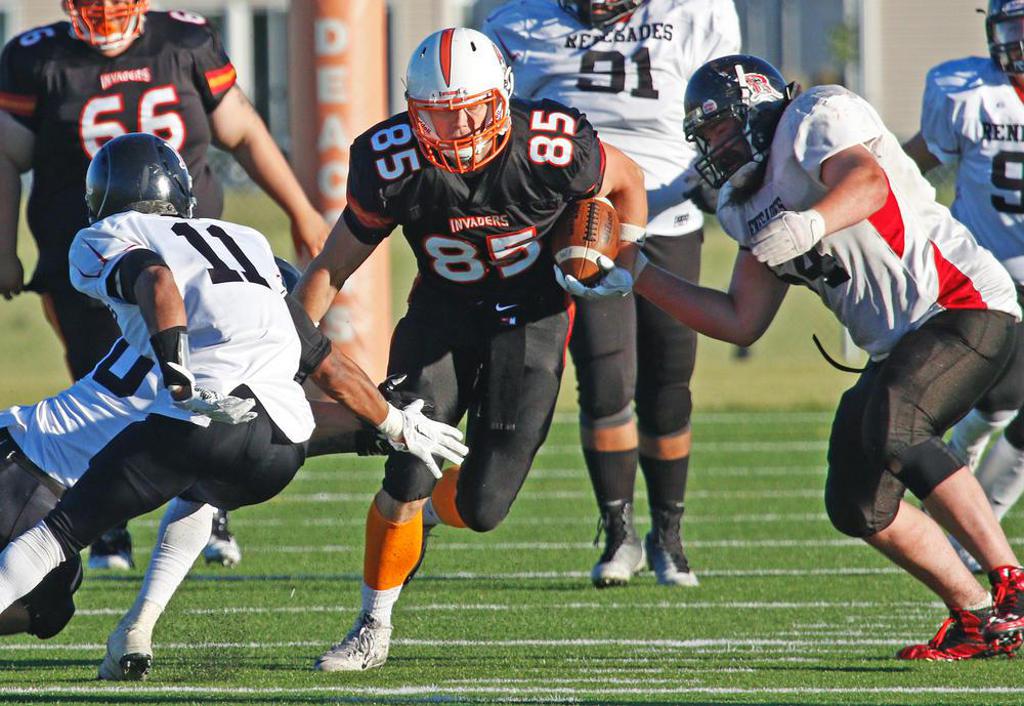